Supporting Palliative Care Across the Globe

Supporting Palliative Care Across the Globe

“Most of the history of medicine was palliative care,” according to Mark Stoltenberg, MD, MA, a faculty member of the Division of Palliative Care and Geriatrics at MGH. Before the dawn of modern medicine, much of healthcare was not actually curative. “We couldn’t fix, or cure or anything,” Stoltenberg continues. “We didn’t have safe surgery. We didn’t have antibiotics.”

Over time, scientific advancements and improvements in technology changed the face of medicine. In 1948, Cicely Saunders, a British physician, founded the first official hospice care center, re-introducing an explicit focus on end-of-life care to medicine. The World Health Organization (WHO) took the next step and recognized palliative care as its own specialty—separate from hospice care—in the 1990’s.

“Palliative care is focused on a response to suffering for any patient with serious illness,” Stoltenberg explains. “It’s meant to maximize and support quality of life, for both patients and their families.”

For Bethany Rose Daubman, MD, an attending physician at the Division of Palliative Care and Geriatrics at MGH, this means palliative care offers a unique interdisciplinary approach to medicine that extends beyond individualized medical care.

Daubman’s journey to palliative care took what she would call a “backwards” approach.

“I was in Med school at a really young age and was really burned out,” she explains. “I was focusing on research and basic sciences and couldn’t feel that human connection.”

It was very challenging and an incredible honor to be invited into patients’ homes as they were dying, as they were feeling sick, as they had symptoms,” she says. “To be able to offer music therapy and be present, witnessing the suffering and offering music was incredibly transformative to me. Palliative care is such a natural fit for me because the boundaries between what’s considered strict medicine and other parts of the patients’ life disappear.” 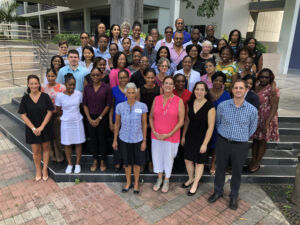 Palliative care’s ability to dismantle the boundaries between medicine and a patient’s whole wellbeing also attracted Stoltenberg. After receiving a BA in religion as an undergraduate student and studying bioethics in medical school, he began to focus on questions about suffering alleviation and the need to focus on the entirety of a patient, leading him to palliative care.

Upon joining the MGH Palliative Care Division, Stoltenberg and Daubman worked with Eric Krakauer, MD, PhD, attending physician at the MGH Division of Palliative Care & Geriatrics. Krakauer had been working to improve palliative care across the globe, collaborating on programs in places such as Vietnam, Russia, and South Africa.

Stoltenberg’s first experiencing delivery global palliative care occurred in 2015 in Belize, working alongside a local anesthesiologist. “I spent a month with [Dr. Beatrice Thompson] in Belize in 2015,” he says. “At the end of her shifts, she would go see as many home patients as she could in the afternoons, and that’s what she’s been doing for 10 years. We saw one patient that lived two and a half hours outside the city. She finished her three o’clock shift, had been there since 7:00 AM, and drove two and a half hours to bring two or three bottles of morphine for a patient that lived out in the countryside almost on the border of Guatemala.”

Similarly, Daubman’s work with the Lakota Nation in South Dakota also revealed the great lengths many need to take for palliative care services and the harmful outcomes of not having local treatment.

“Even within our own country, there are so many incredible health disparities and so many generational traumas. [For example], It’s a cultural value for Lakota American Indians to be born on their land and die on their land,” she shares. “[Without local palliative care resources] they are not even able to be home on their lands to be comforted and supported by their communities but have to be in a hospital 300 or 400 miles away where they aren’t able to engage any kind of culturally congruent end of life practices.”

Recently, a Lancet Commission project found that palliative care standards improve patient outcomes, reduce suffering, and do it at relatively inexpensive costs. However, implementing palliative care programs is still a work in progress—although the WHO declared palliative care a right all health systems must work to offer patients.

“The vast majority of unnecessary suffering that’s occurring in the world right now is in low- and middle-income countries,” Stoltenberg says. “There are far too many millions of people suffering from symptoms and psychosocial suffering that is treatable with inexpensive interventions.”

Now, as they take the helm of the MGH Global Palliative Care Program, a collaboration with the MGH Center for Global Health, the duo hopes to coalesce a community of advanced practitioners to close gaps in palliative care delivery and share and apply the lessons learned from their global partners.

“There are so many people across MGH doing incredible work globally that we want to synergize with,” Daubman proclaims. “Integration and synergy are a huge part of our mission.”