In January 2022, a published Lancet study found that in 2019, nearly 5 million deaths were due to antimicrobial resistant infections. Klebsiella pneumoniae is one bacterium that can develop antimicrobial resistance and as a result has become an increasing global threat. The bacteria, which is normally harmless in the gut, can cause a series of life-threatening illnesses including pneumonia, sepsis, meningitis, and wound or surgical site infections when introduced to other parts of the body. 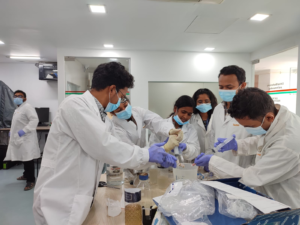 Sridhar (second from left) with colleagues in Bangladesh

K. pneumoniae joins Eschericia coli, Staphylococcus aureus, and Mycobacterium tuberculosis as part of a group of bacteria microbiologists are actively monitoring for their potential to resist current antimicrobials. Sushmita Sridhar, PhD, member of the MGH Global Enterics Laboratory, is one microbiologist working in the global fight against antimicrobial resistant bacteria. Sridhar’s work focuses on understanding these life-threatening microbes and improving surveillance of them.

In October 2021, the MGH Center for Global Health awarded Sridhar the first Research Development Award in recognition of her ongoing work. Her project: “Genomic and phenotypic characterization of invasive Klebsiella pneumoniae in Bangladesh” aims to understand the prevalence of antimicrobial resistant K. pneumoniae.

“K. pneumoniae is a bacterium that we know is an emerging threat,” Sridhar says. “Yet in a place like Bangladesh, there is very little known about it. We do not know how similar or different it is to K. pneumoniae found in other parts of the world, which is important if we want to design vaccines against it.”

In Bangladesh, Sridhar works with clinical microbiologists at the Institute for Developing Science and Health Initiatives to perform both phenotypic and genomic characterization of K. pneumoniae. Phenotypic characterization involves isolating, growing, and then testing a variety of antimicrobials against a microbe. Genomic characterization, a newer and more expensive option, involves extracting the genetic material of a microbe, multiplying it, separating it into a readable sequence of genetic code, and examining that code for resistance genes. Both types of surveillance are necessary to fully understand antimicrobial resistance. Sridhar is helping establish local surveillance by teaching local microbiologists to perform genomic sequencing of bacteria.

K. pneumoniae is just one bacterium that poses a threat because of antimicrobial resistance. However, as with other microbes, the bacterium’s effects on the body are context specific. Sridhar’s work is an attempt to ascertain whether K. pneumoniae has adapted to become more virulent in certain settings, like Bangladesh. Expanding surveillance systems helps better understand microbes, their prevalence in the community, and their potential to cause illness. It will also help set the stage for improved response to other outbreaks.

“When I was in Bangladesh [in April], they were having the largest cholera outbreak the country has had in the last sixty years,” Sridhar says. “You do not hear about this outbreak here in Boston, but while I was there, I was stricken by how bacteria surveillance is an urgent need. In microbiology we can grapple with these needs and solve them.”