Traumatic injuries account for more than five million annual deaths, roughly as many as HIV, malaria, and tuberculosis combined. Ninety percent of these trauma-related deaths occur in low- and middle-income countries that often lack sufficient surgical staff or surgical tools to treat these injuries. For those that require complex facial reconstruction, the disparity in care can be even greater. 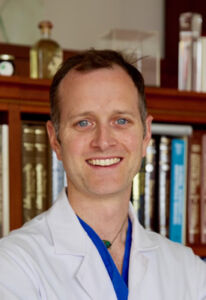 In Boston, David Shaye, MD, MPH, FACS, uses innovative technologies and ample resources to perform procedures such as face lifts (rhytidectomies), rhinoplasties, and other facial surgeries in his role as facial plastics and reconstructive surgeon at Mass Eye and Ear and as an assistant professor of otolaryngology at Harvard Medical School. In Rwanda, Shaye performs a range of more urgent facial surgeries in response to facial trauma or deformity and builds facial surgery capacity by training local facial plastic and reconstruction surgeons.

Shaye began working in Rwanda over a decade ago, first as a resident conducting research on the prevalence of cleft lips.

“People sometimes ask ‘Why do they have so many cleft lips [in Rwanda]?’” Shaye says. “But the answer is they actually do not. They have fewer cleft lips than we do in the United States per capita, but there are not enough surgeons, and the medical system is not developed enough to solve that type of problem. So, you have people growing up until they are forty or fifty with a cleft lip who have never been able to be treated.”

This systemic explanation for the number of untreated cleft lips helped Shaye recognize that more consistent efforts were needed to meet disparities in cleft lip treatment and other facial surgeries. Shaye identifies two main struggles Rwandans, and others in low- and middle-income countries, face while seeking care: the lack of available surgeons and lack of access to newer surgical technologies and supplies.

Shaye now spends at least three months of every year embedded in countries on the African continent to perform surgeries and, more importantly, train local surgical staff. Shaye has committed to this time split for a decade, building relationships with partners in Rwanda and Zimbabwe.

“Living in and committing yourself to a certain area gives you a very deep sense and appreciation for what the problems are and how as a team to manage them,” Shaye says. 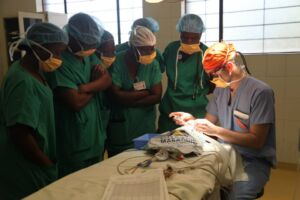 Shaye’s work focuses on three pillars: trauma, cancer reconstruction, and congenital anomalies. All three pillars contribute to facial injuries that cause loss of life or an inability to comfortably rehabilitate into society. Shaye works with his partners in Rwanda and Zimbabwe to perform surgeries to meet each of the three pillars and train future surgeons to do the same. He also maintains a partnership with Doctors Without Borders, who he recently traveled with to perform surgeries in Nigeria, where noma, a gangrenous infection of the head that occurs in malnourished children, is prevalent.

Through these partnerships, Shaye has performed countless surgeries and trained several surgeons to perform complex facial surgeries with the tools at their disposal. Training is vital because it means there are more staff to not only perform surgeries, but also train future surgeons, a cycle that could have a tremendous impact on the availability of facial plastics and reconstructive surgeons in other countries.

“Facial surgeries are artful types of surgeries that take a long time to learn,” Shaye says. “I teach and perform with surgeons I have worked with for five to ten years. But when I come home and see they are performing the same surgeries, that is the ultimate win. The surgery I might be able to perform four or five times will now be taught to other surgeons and be done hundreds of times.”