Mary Sebert, RN, MPH became a nurse 36 years ago. In this time, she has served in a variety of roles, including clinically in hospitals and disaster settings, as a nursing coordinator, as a nursing educator in Uganda, and, currently, as the Director of the MGH Global Nursing Program.

Pressed on why she chose the profession, Sebert recalls her grandmother’s premonition. “I think my grandmother led me to nursing,” Sebert starts. “When I was 14, she said that I was going to be a nurse and I actually never really thought about it. Then I went to college and, somehow, I came out a nurse.” 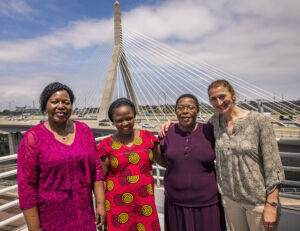 She spent the first half of her career working domestically before entering the Peace Corps, which sent her to Romania for four years, in the early 2000s. She later decided to work with the Peace Corps again, this time partnering in Uganda with Seed Global Health—an organization devoted to the development and education of health workforces across the globe. After arriving in Uganda in 2013, Sebert embedded herself in Mbarara University of Science and Technology (MUST) as an educator, training nursing students while building relationships with the local staff, faculty, and trainees.

This work with Seed brought Sebert in connection with the MGH Center for Global Health (CGH) for the first time. Through Seed, Sebert worked with CGH’s newly developed Global Nursing Program, under the leadership of its founder, Pat Daoust, RN, MSN.

When her time with the Peace Corps and Seed ended, Sebert knew she wanted to continue her career in global health. “I moved to Boston to continue working with Uganda, particularly, and work on the programs that we started for the MGH Global Nursing Program,” Sebert says. “Now I find myself as a director of the Global Nursing program, which was a complete surprise.”

Today the Global Nursing Program has supported 50 MGH nursing fellows and trained or graduated 1,325 Ugandan students through its work. In her time with the program, Sebert has helped launch the Masters of Critical Care Nursing Program in Mbarara, conducted leadership courses for international colleagues, established midwife training in Lira, Uganda, and helped build up nursing capacity in Native American reservations in Pine Ridge, South Dakota.

One former global nursing fellow is Sophia Harden, RN, a MGH intensive care nurse who in 2016, responded to a need in wound care training for nursing staff at MRRH by spending eight weeks in Mbarara, Uganda.

“I was sent over there to do clinical work, classroom didactics, to work in the surgical ward with the nurses, and to try to innovate new methods of burn care,” Harden recalls. “There was such a lack of resources.”

Over the course of eight weeks Harden helped successfully innovate new, context-specific methods of burn treatment and helped support and educate several students in the surgical ward. However, upon returning to Mbarara she found the longest lasting impact of her initial work was the relationships she built with the MRRH staff.

Relationships have always defined the history and success of the Global Nursing Program: those between Sebert and fellows, between fellows and the students they train, and between nurses and patients. Through them, the Global Nursing Program continues to support global colleagues despite COVID-19 disruptions. For Sebert, this has meant finding creative ways to connect with colleagues virtually and pivot her skills to support pandemic responses both locally and globally alongside the MGH Global Disaster Response and Humanitarian Action program.

“I’ve built relationships wherever I go,” she says. “They’re super important and I try to be supportive in them.”