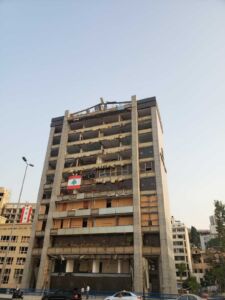 On August 4, two explosions tore through the city of Beirut, the second of which registered as a 3.3 magnitude earthquake, killing at least 220 people, injuring over 6,000, and leaving roughly 300,000 homeless. Recently, a fire has ignited in the same port region, compounding the city’s devastation.

Dr. Kaafarani, originally from Lebanon, has been integrated with the trauma and critical care team from the American University of Beirut (AUB).  AUB is the largest academic teaching and referral center in Lebanon and has received more than 500 injured patients in addition to sustaining damage to the campus from the explosion.  Previously, Dr. Kaafarani has responded to multiple missions to areas of active conflict with the organization, Doctors without Borders. Sponsored by the Durant Fellowship for Refugee Medicine, he will remain in Beirut from September 9th through the 19th.

“Getting a chance to show a symbolic gesture of solidarity to the people I grew up with, not only brings help to people in times of need, but some peace to my heart.”

We invite you to learn more about the current response and how to support surgeons like Dr. Kaafarani through the following organizations.

American University of Beirut. The AUBMC Disaster Response to the August 4 Beirut Explosion Fund will be used to support the care of patients and the repair to the hospital’s campus that was damaged during the explosion.

Direct Relief is supporting several hospitals in Beirut, attending to thousands of trauma patients as well as providing general medical care and addressing the county’s severe lack of essential medicines and supplies.

Project HOPE has stood up its emergency response team in Beirut to coordinate the distribution of medical supplies and protective gear for hospitals and first responders.

“It [Beirut] is already shedding the dust off itself. A city that defines love and life”

Global Disaster Response and Humanitarian Action at the MGH Center for Global Health is committed to providing well-trained personnel and resources to immediately respond to a full spectrum of humanitarian—natural or man-made—emergencies in coordination with local authorities. As a center of excellence in disaster preparedness and response, GDR leverages the multi-disciplinary expertise of MGH to deliver timely, high-level care to people affected by disasters and humanitarian emergencies.

The Thomas S. Durant Fellowship honors the spirit of Dr. Durant’s dedication and service through sponsoring health care professionals to serve refugee populations and victims of complex humanitarian disasters. Click here to learn more and to find out how you can donate.